Indian accuses England to return stolen diamonds back to them after Queen’s demise. 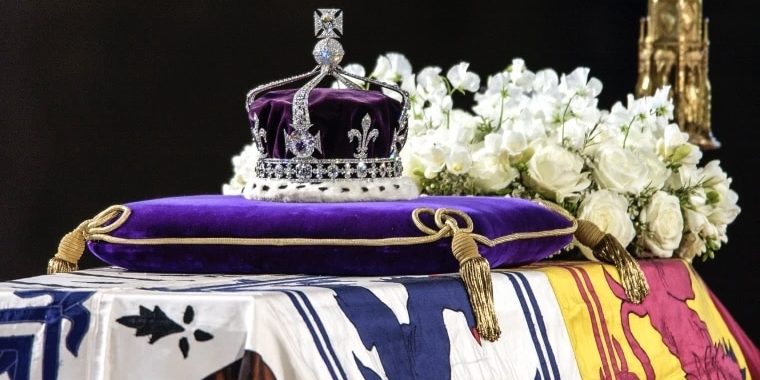 After the death of Queen Elizabeth II last week, online users are calling for the British government to surrender artifacts obtained by the British Empire, including the Kohinoor diamond — one of the most famous diamonds in the world.

Conversations about the diamond — also spelled Koh-i-noor — which is part of the British crown jewels, have been trending on social media amid coverage of the queen’s death, with users posting their opinions about the empire — and memes about stealing the diamond back.

The online jokes aside, many point to the serious colonial history behind Britain’s possession of the diamond.

The Kohinoor, which means “Mountain of Light,” was originally about 186 carats, and while its exact origins are unknown, it was most likely discovered in South India in the 13th century.

Danielle Kinsey, an assistant professor of history with a focus on the history of 19th century Britain and empire at Carleton University in Ottawa, Ontario, said its impressive size often shrouds its less appealing history.

“More importantly, it has a history of being part of war booty or trophies taken as the result of war in South Asia. So in a lot of ways, it is a symbol of plunder and represents the long history of plunder imperialism,” she said.

Kinsey said one of the ways the British government and scholars rationalized British imperialism in India and other places around the world was to say that their brand of imperialism wasn’t about plunder but about uplifting and civilizing colonized populations.

“The actual histories of British imperialism tell a much different story, one of horrific violence, dispossession, prejudice and significant economic exploitation,” she said. “I think people are outraged by how the Kohinoor continues to function as a trophy of empire as long as it remains in the crown’s possession.”

The diamond found its way through the hands of several dynasties, beginning with the Mughals in the 16th century, then the Persians and then the Afghans, before the Sikh Maharaja Ranjit Singh obtained it in 1813.

Maharaja Duleep Singh, the son and successor of Maharaja Ranjit Singh, held on to the diamond until the British annexed Punjab in 1849. Duleep, only 11 years old, signed the Treaty of Lahore, which also stipulated that Duleep would give the diamond to the queen of England.

Lord Dalhousie, a Scottish statesman and governor-general of India, coerced Singh into “gifting” the diamond to Queen Victoria, Dalhousie wrote in a letter in August 1849 to his friend Sir George Couper.

“He had visions of it becoming the centerpiece of the British imperial crown and had visions of himself becoming famous for facilitating the crown’s appropriation of the stone,” she said.

The diamond was sent to England, and after an inspection, it was unveiled to the public at the Great Exhibition of 1851, where many were unimpressed with it, she said.

“This was something of a scandal, and the diamond became a lightning rod for critiques of East India Company plunder imperialism in India, especially during the recent Anglo-Sikh War,” Kinsey said. (The Royal India Company was the royally chartered company formed to exploit trade with East and Southeast Asia and India.)

To mitigate the scandal, Prince Consort Albert had the diamond recut and polished — leaving it nearly half its original size, about 105 carats, but shinier, a report from the BBC said.

Rumors that the diamond was cursed also spread during its unveiling, positing that any man who wore the diamond would experience great misfortune and that, therefore, it could be worn only by a woman, Kinsey said.

A combination of the scandal about the East India Company’s plunder imperialism in India and the rumor of the diamond’s curse lingered, so the Kohinoor never became the exalted gemstone in the imperial crown in the way that Dalhousie had envisioned, she said.

Initially sparingly worn as a brooch by Queen Victoria, the Kohinoor became a part of the crown jewels; it was first set in the crown of Queen Alexandra and then in the crown for the Queen Mother’s coronation in 1937. Queen Elizabeth II also wore it during her coronation in 1953, according tothe Royal Trust Collection.

Some shared their frustration on Twitter about the U.K.’s possession of the diamond, citing its history and the sordid relationship between India and Britain.

“There are many, many other artifacts in Britain that continue to function as imperial trophies, and when people from around the world have to shell out the money and go through all of the visa and travel issues to go to Britain to engage with pieces of their own cultures and their own pasts, this continues the trauma of empire for them. I can very much understand their frustration,” Kinsey said.

The push for Britain to return the diamond isn’t new. India, Pakistan, Iran and Afghanistan have repeatedly demanded that the British surrender it.

Several countries have claimed the diamond, although modern-day borders make the process complicated.

“Many governments have asked for the return of the Kohinoor and have made a claim on it, including India, Pakistan, Iran and Afghanistan,” Kinsey said. “Duleep Singh’s Sikh empire was based out of Lahore in 1849, which today resides in Pakistan, and that complicates an easy transfer of the stone back to India. The stone was said to have been mined near Golconda, which is in India today.”

Kinsey said she believes it’s only a matter of time before the Kohinoor is surrendered.

“To be purely pragmatic about it, at some point the monarchy will understand that keeping the diamond is more of a public relations liability for them than an asset,” she said. “I think the same is true for many, many looted artifacts in Britain today and the institutions that house them. Also, it’s the right thing to do if the royal family is serious about making apologies for the ills of British imperialism and how they profited from it.”

It’s unknown whom the king will endow with the crown and diamond. Many commentators speculate they will be given to Camilla, the new queen consort.

“If the pattern holds of what’s happened with previous monarchs, it should become part of the jewelry available for Camilla to use,” Kinsey said, although she said she isn’t certain.