How Over Two Million Africans Died in World War One (I) 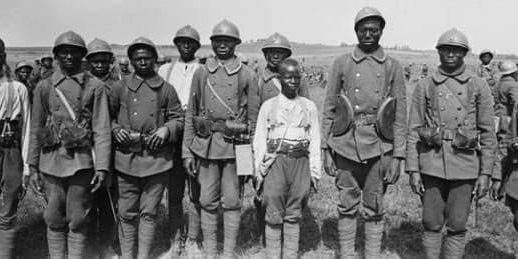 Two million Africans were killed when the continent was drawn into the conflagration of World War I. The war and its aftermath wrought seismic changes in Africa that remain at the root of conflicts in many countries in Africa.

With World War I raging in Europe, African soldiers were forced to fight for their between 1914 and 1918. France recruited more Africans than any other colonial power, sending 450,000 troops from West and North Africa to fight against the Germans on the front lines.

During the war, around 30,000 Africans died fighting on the side of France alone. Down inside Africa, African troops were also deployed in Africa itself. A Senegalese infantry helped France seize the German colony of Togo, and the British also fought alongside African troops against the Germans until 1918. Africans also served as scouts, porters and cooks.

Germany also exploited Africa, forcing thousands of Africans into military service in Tanzania — the former German East Africa.
During the war labor shortages in the fields, which led to widespread starvation / economy ultimately collapsed around 1 million people died in EA.

In Cameroon, the former colony was divided between Britain and France, with the French getting more than four-fifths of the land. After the end of colonial rule in 1960, the divided country was reunified, but by no means peacefully. The Cameroon English-speaking minority, which felt abandoned by the central government, is still fighting for its own homeland today.

Similar situation like this still occur in different countries around the continent.

After the war a monument was set up in Reims in respect of the African fallen heros on WW1.
But The original monument to the “Black Army,” (those who fought the WW1) set up in Reims in the 1920s, was removed by the Nazis during World War II and never resurfaced.