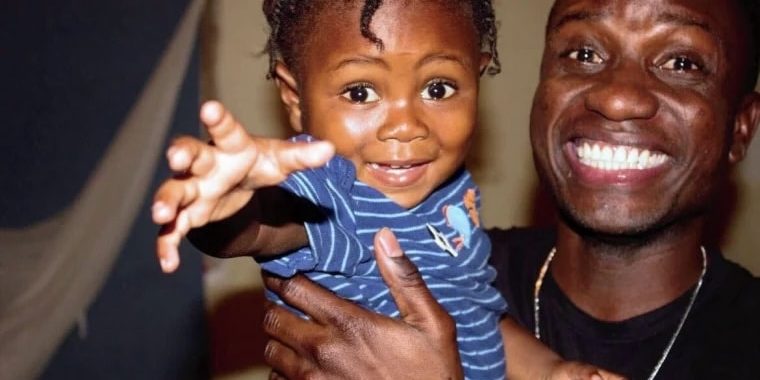 A Texas student has raised over $135,000 in donations to support the adoption of his son, Emilio, whom he discovered abandoned as a baby while he was visiting his homeland, Haiti.

Jimmy Amisial, 27, who attends Texas State University and travels to Haiti at least twice a year, said he was walking to an event in his home country in 2017 when a woman brought to his attention a baby left in a heap of trash. The baby, who was naked and covered in fire ants, cried loudly as others watched from afar. People were too afraid to touch him out of fear that the baby was cursed, Amisial said. That’s when he decided to rescue him.

“Without hesitation, I picked him up,” Amisial said, “and I went to my mom’s house with him.”

Since then, Amisial has worked to gain custody of Emilio, who resides with Amisial’s mom in Gonaives, Haiti.

Amisial called the police soon after he found the baby, he said, and an investigation was launched — but Emilio’s parents were never found. The next day, the police arrived at his mother’s house with a judge who asked Amisial whether he wanted to be Emilio’s legal guardian, which he later accepted.

However, the decision to take on the role of a parent wasn’t easy. Amisial said he tossed and turned the night before he signed papers to become Emilio’s legal guardian.

“I’ve always wanted to be part of something great,” Amisial said. “To me, that was the moment, and I took a leap of faith by saying, ‘Yes, I’m going to be there for him.’”

After he signed legal documents in January 2018 to start the process of becoming Emilio’s guardian, Amisial set out to raise money to adopt him. The cost of adoption is estimated to be $30,000, but it can vary, said a representative of America World Adoption. Amisial then created a GoFundMe page last month that has since raised over $135,000.

“People have been showing a lot of love and support, which I’m really grateful for,” he said.

Amisial, who is majoring in mass communications and has dreams of one day having his own television show, had to take a break from school to care for Emilio, who is almost 5 years old and calls Amisial his dad. He said he intends to use the extra money acquired through his GoFundMe page to continue his education while he helps build Emilio’s future. He also plans to donate some of the money to orphanages throughout Haiti.

Amisial said that once the adoption process is complete, he wants to move Emilio and his mother to the U.S. for a better life. He said he video-chats with them frequently through WhatsApp but fears for their safety now that Emilio’s story has gone viral. He is also concerned about the crime and violence in Haiti, which he said have only become worsefollowing the assassination of President Jovenel Moïse last year.

As Amisial patiently waits for news about his guardianship request, which was delayed because of the coronavirus pandemic and can take up to two years to be approved, according to the website of the U.S. Embassy in Haiti, he is happy he had the chance to change his son’s dire circumstances, he said.

“If you want to be great in life, you have to face your challenges, Amisial said, “and it’s the best decision ever.”