A very devastated son who lost three generations of his family in horrific crash woke up to the carnage: ‘He saw my dad’s body on the road’ 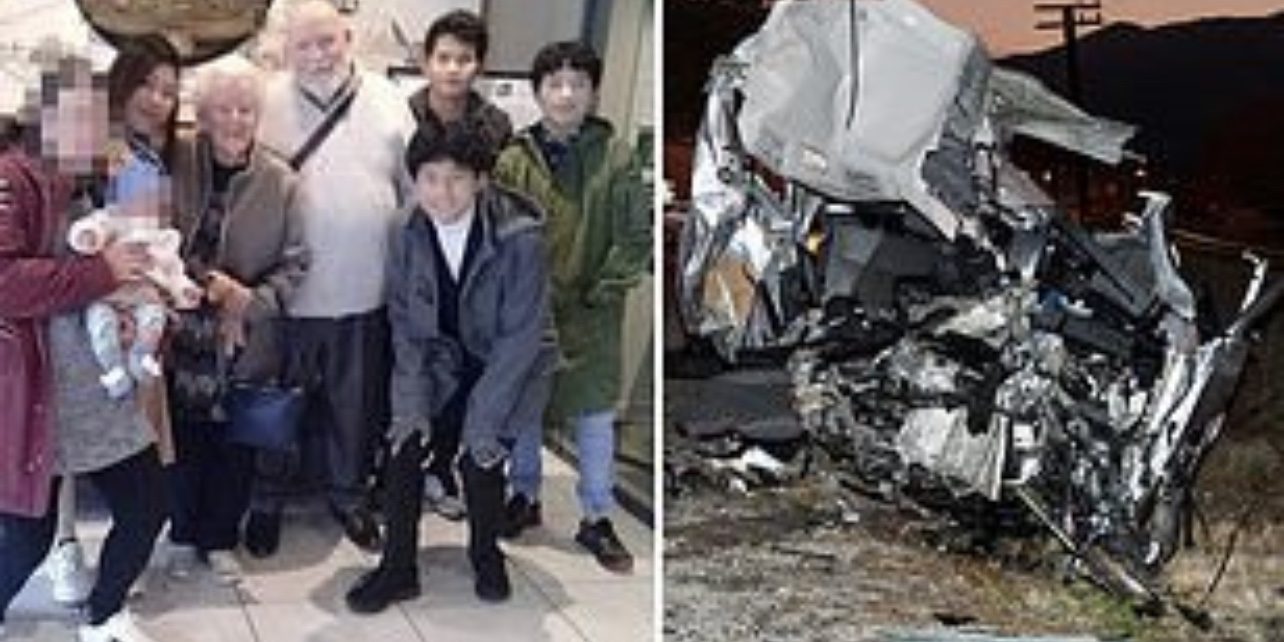 A man lost members of three generations of his family in a horror crash that claimed the lives of seven people as they travelled home from a funeral.

Seven of nine people in the van died instantly when it collided head-on with a semi-trailer at Picton, New Zealand after being driven overnight to get from one end of New Zealand to the other.

‘(My brother Pedro) saw my dad’s body on the road and then my brother Luie, he was awake and then he collapsed,’ relative David Lagud said. ‘It’s just shocking.’

Pedro’s partner, daughter, mother, brother, stepfather, aunt and cousin were all killed in the crash, while another two brothers survived.

David said Pedro was distraught after hearing his partner, who is understood to be Taiwanese, and child had died. ‘He was devastated, he was crying a lot. Both of his loves are gone.’

A woman whose name has been withheld and her daughter Mika, thought to be around 10 months’ old, also died.

Two of Diseree’s sons, Pedro Clariman, 26, and Luie Lagud, 16, survived but Luie was in a coma and had surgery for spinal and head injuries. Pedro is the father of Mika.

Diseree’s three other children – David, Princess and Joanna – did not travel.

David didn’t go because he gets motion sickness and had to work at a local supermarket in Pukekohe, near Auckland.

Pedro’s partner called David on Saturday night, reminding him to feed their bird.

David also missed a call from his stepfather Paul on Saturday night, but Paul later texted asking him to clean the house before they got home late on Sunday night.

‘It’s just shocking, to happen that fast,’ David Lagud told the New Zealand Herald. ‘In a blink of an eye, it’s all gone.’

The crash, which left the van completely destroyed, happened at around 7.30am on Sunday.

They left Dunedin on Saturday afternoon and rested for a few hours with a friend in Christchurch before leaving at 2.30am on Sunday to make a ferry crossing to the North Island.

David has spoken with Pedro, who along with Luie is in Wellington Hospital, since the crash.

Pedro had minor injuries and was able to walk, though with some difficulty.

According to Pedro’s account, he was driving when the family left Christchurch, allowing Paul – in the front passenger seat – to sleep for almost four hours.

Then Paul, who seemed to be well rested, swapped with Pedro to complete the journey to the ferry.

Pedro played with his baby Mika before going to sleep, but jolted awake to a scene of carnage.

‘(Pedro) saw my dad’s body on the road and then my brother Luie, he was awake and then he collapsed,’ David said.

‘Then the next minute, the helicopter was there, taking my little brother to the hospital.’

The van is thought to have crossed the centre line before hitting the truck head-on.

Diseree had posted some footage of the family’s journey to Facebook, David said.

He said they had seemed ‘so happy’. ‘They had good memories before they died.

The school’s principal Carol Willard said staff and students were ‘deeply saddened’ and called him a ‘much-respected and loved member of our school community’.

Paul Brown’s sister said he was a ‘wonderful brother’. ‘We’re coping as well as can be expected at this time, seven members from one family to go at once is just tragic.’ she said.

He said members of the Wellington Filipino community were on stand-by to help the two survivors.

The Philippines Embassy is believed to be assisting New Zealand police with the investigation and some of the bodies have been sent to Christchurch.

A man who hosted the family just outside Christchurch as they took a break in the mammoth drive to get home rang a New Radio talkback station on Monday, the NZ Herald reported.

The man who gave his name as Bill said he knew Paul Brown since 2015 when they met in church and was happy to open his home to give the family some respite.

He said the family arrived at his house at around 10pm on Saturday.

They only stayed for about four hours, though he offered for them to stay longer and get more rest.

But Mr Brown said they would make their way to Picton and grab a few hours sleep waiting for the ferry back to the North Island.

Bill said he and his friend chatted while one of the drivers slept, but the rest of the family snoozed or just rested comfortably.

‘This was a vibrant family – my friend was a high school teacher… his wife started an online business and he was really proud of her,’ Bill said.

‘They had four boys and girls… One of the boys married a Taiwanese young lady and it was their baby [who] died.

‘I was really taken with this young woman, she was so nice and it really hits home at my heart that she’s gone and the baby’s gone.

‘Her husband survived… he’s going to wake up and find that he’s now alone.’

Bill thought fatigue may have been a factor in the crash.

‘You spend every spare moment thinking of the what-ifs and the whys,’ he said.

‘My friend was a high school teacher, his students are finding out now that he’s not coming back.’

Five hours after leaving Bill’s house, the van smashed into the truck just outside Picton on State Highway 1 south.

The driver of the refrigerated goods truck suffered only minor injuries and has been released from hospital.

The crash is New Zealand deadliest since eight people were killed in a crash near Taupō in April 2019 and is the worst in the South Island in more than two decades.

Marlborough Area Commander Inspector Simon Feltham said support would be offered to first responders to help them cope with the trauma.

‘One of our staff members, it was their third day working out of police college,’ he said. ‘It’s a horrific thing to have to deal with.’