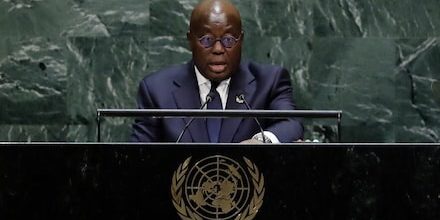 Under the administration of President Nana Akufo-Addo, Ghana has been meticulously exporting an image of the country as a safe destination for Black people and Ghanaians in the diaspora. For years, the nation known as the Black Star of Africa has been seen as a beacon of tolerance and peace.

But no matter how bright stars shine, they all fade and die eventually. A horrifically repressive anti-gay bill in Ghana is a tragic example of how my father’s homeland is rapidly succumbing to the gravitational pull of fundamentalist hatred of LGBTQ people.

First, some context. Many African countries have anti-gay laws still on the books from their colonial eras. Ghana, a religiously conservative country and former British colony, has long outlawed “unnatural carnal knowledge,” though the law has rarely been enforced. In recent years, a few African countries have started to remove those colonial-era laws. Mozambique did so in 2015, followed by Botswana and Angola in 2019.

Not so for Ghana. Local LGBT activists told me things took a dark turn in 2019, after the World Congress of Families, a U.S.-based Christian group, organized a conference in Ghana. The group’s goal was to push harsh criminal punishments for LGBTQ behavior, as it succeeded in doing in Uganda and Nigeriaseveral years ago. “They confidently said they were going to do the same thing in Ghana” said Alex Donkor, the executive director of LGBT+ Rights Ghana, an advocacy group, who was at the conference.

In 2021, through fundraising and collected donations, LGBT+ Rights Ghana opened a community resource center for LGBTQ people in Accra. “We wanted a safe space, a place where we could provide support for each other,” Donkor told me. When the center opened and word got out, it was raided by law enforcement, following claims it was a recruitment center for a gay agenda. The center was quickly shut down.

A few months later, a coalition of religious leaders introduced a bill called the Promotion of Proper Human Sexual Rights and Ghanaian Family Values Bill. It is one of harshest and most wide-ranging anti-LGBTQ legislations I have seen in my career as a journalist writing on human rights.

The bill promises jail time and fines for anyone who goes against “human sexual rights,” which includes “sexual intercourse between or among persons of the same sex,” and identifying as gay, lesbian, bisexual, transgender, pansexual, nonbinary, queer, an ally “or any other sexual or gender identity that is contrary to the binary categories of male and female.” Those who engage in gay sex could spend three to five years in jail. It outlaws LGBTQ organizations. The bill provides state support for conversion therapy. Cross-dressing and same-sex affection such as holding hands can come with a jail sentence of six months to a year.

As of now, the bill is still at the committee level in Parliament, and in private deliberations. There is bipartisan support for the bill among the two major parties. Many churches and other religious institutions also openly support anti-gay measures.

This matter hits home for me. I started my journalism career in Ghana nearly 15 years ago. I am stunned to see current and former journalists, some that I used to work with, using their platforms to help spread this hate and misinformation against LGBTQ people in Ghana. Some journalists have even gone so far as to create an organization called Journalists Against LGBT.

So yes, under the new bill, I could go to jail for writing this column.

Ghana was not always like this. But now, I fear for my LGBTQ friends there — and the bill is not even law yet. One friend told me she now stays out of sight, avoiding crowded places. She got herself a car, because she doesn’t trust Uber drivers she doesn’t know. Last year, in the city of Ho, 21 people were arrested for attending a legal support training for activists. They were jailed for three weeks. This week, LGBT+ Rights Ghana put up billboards calling for equality and freedom. Anti-LGBTQ politicians called on the police to tear them down.

What or who is motivating Ghana’s politicians to push this agenda? They should be spending political energy on things that actually matter, such as improving roads, building better health-care systems and fixing Accra’s annual flood problem. Ghanaians are suffering under runaway prices for goods, with inflation at the highest level in 18 years. Yet politicians are focusing on oppressing Ghanaian citizens simply for being themselves.

Should Ghana pass this law, the Black Star of Africa would be setting an insidious precedent for state-sponsored abuses. Ghana wants people in the diaspora to return, but the message is clear: Come here only if you’re straight.