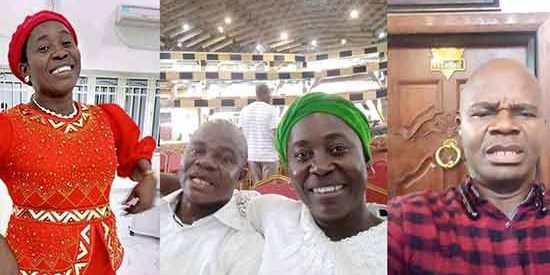 On Friday, the father-of-four made the statement while being escorted to the Abuja High Court.

“Let me tell the entire world, I have suffered greatly,” he said.

I’ve been left behind.

Cancer of the lungs killed my wife; I did not hit her.

My wife, Osinachi Nwachukwu, died of lung cancer, so I’m suffering for what I don’t know”!

On April 8, Osinachi died, and many of her colleagues accused her husband of subjecting her to domestic violence, which led to her death.

Mr Nwachukwu was arrested on April 11, 2022, by the Federal Capital Territory, FCT, Abuja Police Command, after Osinachi’s younger brother reported a case of culpable homicide against him.

He then appeared before the High Court of the Federal Capital Territory, Abuja, on May 27 for the first time, where he was charged with 23-count by the federal government.

During the court session on Friday, the judge, N.K. Nwosu-Iheme remanded Mr Nwachukwu, at the Kuje Correctional Facility, pending the hearing and determination of the homicide-related suit instituted against him by the Attorney-General of the Federation.

Mrs Nwosu-Iheme gave the order after the accused pleaded not guilty to 23 counts bordering on domestic violence and homicide, among others.

The judge ordered that Mr Nwachukwu be remanded at the correctional facility, while the trial was adjourned to June 16 from noon and June 17 by 9 a.m.

“The business for today is for arraignment; accelerated hearing is ordered,” declared Mrs Nwosu-Iheme.

The defendant should be remanded in Kuje Correctional Facility pending the hearing and determination of this suit,” she said.

The case with charge number CR/199/2022 was filed at the High Court of the Federal Capital Territory, Abuja, on May 20, 2022, by the Head of the Sexual and Gender-Based Violence Department of Public Prosecutions of the Federation, under the Ministry of Justice, Yewande Gbola-Awopetun.

He was charged under sections 104 and 379 of the Administration of Criminal Justice Act, 2015, by the Attorney-General of the Federation.

Nwachukwu was charged with culpable homicide contrary to section 221 of the Penal Code, which is punishable with death.

The federal government alleged that the defendant deprived the deceased of her liberty by restraining her movement and locking her up in the house.

The prosecution also accused the defendant of subjecting the deceased to emotional, verbal and psychological abuse, contrary to section 14(1) of the VAP Act, 2015.