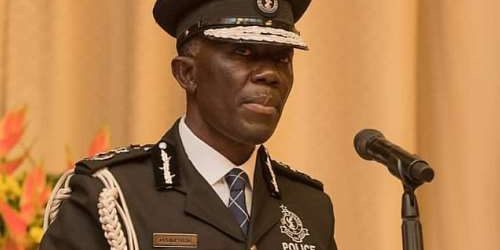 I am one of the senior citizens of this country who consider that he has a duty firstly, to the Almighty God, our maker, secondly to his Nation, Ghana and lastly to his Family and friends. It is in this vein that I write to congratulate you, the Inspector General Police of Ghana (COP1) for the protection of the sovereignty state of Ghana by your swift and exact response to the British high commissioner for meddling in the national security matters of a sovereign state. All good citizens must be seen educating the people of Ghana including the British High Commissioner about the provisions of the 1992 Constitution, hence your exact did is commendable. The very good citizens of Ghana salute you Mr IGP and the members of the Police Management Board especially the Director General for Legal Services.

Article 3(5) talked of no crime committed in dealing with anyone who made an attempt to over throw it. Article 13 (2) is clear a person shall not be held to have deprived any another persons of his life in contravention of clause 1 of this Article if that other person dies as the result of use of force to such as is reasonable justifiable in the particular circumstance for the purpose of defence of a property or suppressing a riot, insurrection or mutiny or in order to prevent the commission of a crime by that person. Hence, the Constitution is clear suppression or stoppage or silencing anyone attempting to overthrow it and not wait for the Constitution to be overthrown before you act, so it may be very foolish on the part of any person to say it is a Court which must deal with an attempt to overthrow the 1992 Constitution. The Courts, Authority is to adjudicate the matter in order to clear the person or otherwise.

The Ghana Army and the Ghana Police and other State Institutions are creations of the 1992 Constitution, so all patriotic citizens are to call or remind the Ghana Army and the Ghana Police of their duty at all times to protect, defend and restore the 1992 Constitution, so it must be out of bad judgment otherwise recklessness for one to call on the Ghana Army to stage a coup against the 1992 Constitution (which embodies popular sovereignty) failing that it is useless, such an act is defined as or constitute a treasonable offence, hence such a person with that statement has defined his character or must be regarded as useless and not to be thrown into prison. So the British High Commissioner by her tweet wording arrested again clearly tells that she was fully aware of the first offence, which as stated is a treasonable offence hence any matter with the suspect must be dealt within the diplomatic circle and not in a tweet, which has a global domain effects can be misrepresented. So IGP you were on spot.

Mr IGP, ,I understand why the British High Commissioner is much interested in Lawyer Barker Vormawor, because he is a dual citizenship holder both of Britain and Ghana, so the Embassy must protect a British Citizen so we must appreciate her responsibility. I made a submission in Modern Ghana last week on the dangers of amending the article 8 (2) and Article 94 (2) of the 1992 Constitution to allow dual citizenship holders to occupy Public Making Offices including Member of Parliament . Thanks to God for this gaffe or bite from the British High Commissioner for us to appreciate the burden of Dual Citizenship. Article 8 (2) as amended in 1996 (Act 527) and Article 94 (2) of the 1992 Constitution must be maintained as in the 1992 Constitution.

Mr IGP, I have been a barracks boy at the barracks of Regional Headquarters and Central Divisional Command Kumasi, then with the late JB Aduah, who was then one of the best Detective or CID Officer in Ashanti Region in the model of Detective Shylock Holmes by Sir Arthur Conan Doyle. So I have kept interested in the Work of the Police.

So I happy with your good work, which include, a very good choice of your supporting team including the Director General of Operations, the Director General of Legal Affairs, you have strengthened the Public Relation Department with very competent and seasoned Police Officer as a Director General of Public Affairs who engages with the public making the Police to adhere to the doctrine of the 1992 Constitution and above all you have boosted the morale of your personnel by directing them to act professionally and boldly as defined by the 1992 Constitution and the laws of Ghana so there is nothing to fear from loose threats if one is clean and thus performs his work diligently. So they should be free and bold to cause the arrest of any politician or person of authority who threatens their life or work.

This when the Bogoso crime officer made known to you (IGP Dr Dampare) during you visit to Bogoso that his work was being hampered by the interference of some politicians and people of influence within the area. He even mentioned that they have even threatened to cause him to be transferred from the station to another area. So upon hearing the complaint you got infuriated and ordered the officer to take the due process in arresting these unnamed persons. You even gave your number to him to let the affected persons to speak to you to make him strong to work. For this very leadership act (Leadership is cause everything else is effect, so I also wish to thank you very much for your par excellence performance so far.